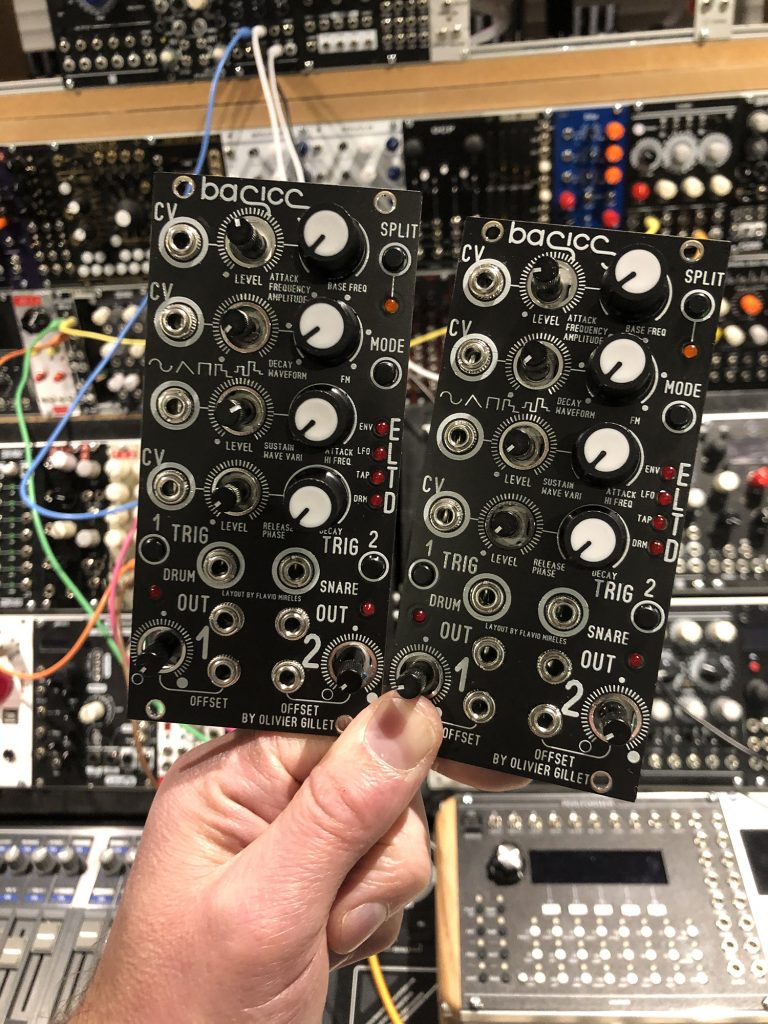 Built three of these Peaks clones with boards/panels from JLCPCB – two with standard firmware, and one with Tim Church’s “Dead man’s catch” firmware. This firmware doesn’t work well with the latest MI Peaks pcb revision, which replaces the hardware offset trimmers with software. However, as the Basics has the offset pots on the front panel, it works perfectly well.

It’s an easy, mainly 0805, build with large hand-soldering pads for the passives (and it’s possible to fit 0603s to them as well if you’re stuck for a couple of values).

The board clearly shows the components and values, but there are two that aren’t labelled: referring to the Peaks schematic, it’s a 249K resistor and an 18p cap to the right of the op amp shown here:

The only other unusual hardware thing is the jacks – the board is drilled for jacks with solder lugs, rather than the usual PCB mount Thonkiconns, though you could still use these.

The ground connections are wired together, then to a ground point on the board, rather than soldered directly to the board. Here’s how I laid it out:

Unlike the MI Peaks board, it can’t be programmed with an ST-Link/JTAG, it only has a jumper for flashing via FTDI. Here’s what I did to flash it using the bootloader.hex and peaks.hex files.

I used an Adafruit FTDI Friend. First, install the drivers if you need to, and configure it for 3.3V by soldering a jumper on the back of the board and cutting the 5v trace.

In Control Panel, go to Device Manager, Ports, and it should show up under USB Serial Port. Make a note of the port (COM3 for me).

Then go to Advanced, and set the transfer rates to 4096:

Connect GND on the Friend to GND on the Basics 3 pin FTDI jumper, then connect RX to TX and TX to RX.

Then, jumper the two pin BOOT header on the Basics board and power it up.

Opening the STM Flash Loader Demonstrator, set the port up like this:

If all’s well, you should see a message telling you the MCU is readable. If not, reflow the STM, check for shorts and check continuity between the processor pins and the programming header, and make sure you’ve got the cables RX to TX and TX to RX.

After that finishes, power the module down, power it back up, connect again and install the Peaks.hex file. Finally, remove the FLASH jumper from the two pin FLASH header on the Basics PCB, and that’s it.