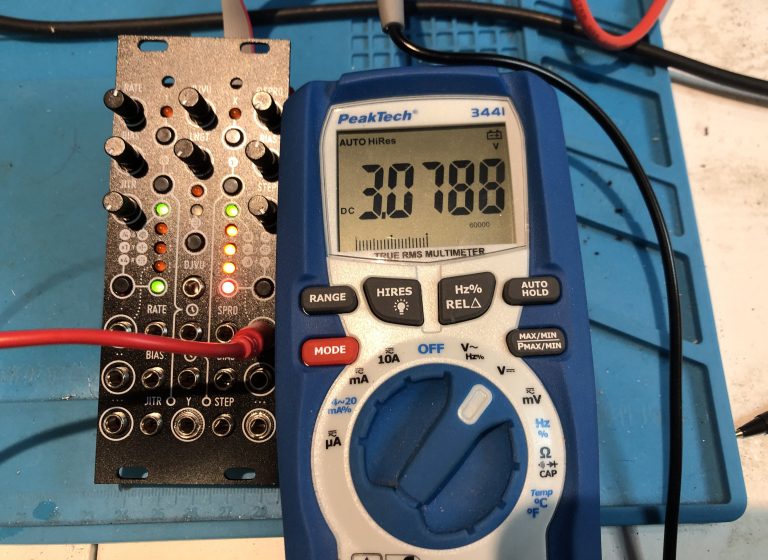 I’ve been putting this build off for a while, because it can’t just be flashed with a pre-built .hex file like Clouds, Rings, etc – the Mutable development environment has to be installed, the firmware has to be compiled, then it has to be calibrated, edited and re-compiled and flashed.

The newer modules – Marbles, Tides 2, Stages – all need this too.

I don’t know any Linux/Unix, aside from one or two basic commands. I’ve not done any compiling since I used to write Z80 and 6502 assembly code when I was 14-15, and I was expecting the development environment to be a nightmare. It was pretty straightforward though, thanks entirely to the fact that Emilie Gillet at MI has made it so with good documentation and what’s effectively a one-click installer – this has been said loads before but the Eurorack DIY community owes her a massive debt of thanks for open sourcing everything.

I built this version as I’m not quite ready to try a teeny tiny 0402 sized build yet – which the original PCB for Marbles is. This clone is 0603.

The Pusherman website has links to everything you need to build it – the Eagle files (I made an IBOM component map from these), Forest Caver‘s indepth calibrations instructions and spreadsheet calculator, etc.

Hardware-wise, it’s no harder than other STM/0603 stuff, but it did take the best part of a day. The only thing I’d do differently, apart from using different colour LEDS, is not soldering in the 4 pin headers on the bottom of the main board (except for the far left and far right ones) until the LEDS are in, as soldering & clipping them is hard otherwise.

Happily it’s all good, and up in the rack.